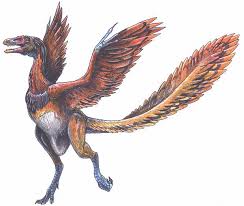 Evolutionists claim birds evolved from reptiles. That is quite a jump from one species to the next. From a ground crawling creature, to a marvelous flying creature with a completely different DNA, and no real evidence of any transitional form in between. Where is the proof of such a jump in evolution?

Evolutionists claim that Archaeopteryx is a featured dinosaur. A transition between reptiles and birds. For decades, paleontologists claimed the Archaeopteryx was the original first bird. Of the few Archaeopteryx fossils, at least two of them have proven to be forgeries. Apparently a thin layer of cement was spread on a fossil of a chicken size dinosaur, called Compsognathus. Bird feathers were then imprinted into the wet cement.

For such a great transition, from dinosaur to bird, there should have been great numbers of fossils with scales turning into feathers and forelimbs turning into wings. If millions of years were required for this transition, where are the millions of fossils documenting it. There are none as evolutionist William Swinton admits, although he still believes it took place:

“The origin of birds is largely a matter of deduction. There is no fossil evidence of the stages through which the remarkable change from reptile to bird was achieved.” 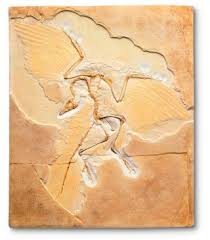 Evolutionist Alan Feduccia, a world authority on birds at the University of North Carolina says: “It’s biophysically impossible to evolve flight from such large bipeds with foreshortened forelimbs and heavy, balancing tails”—exactly the wrong anatomy for flight……..In my opinion, the theropod (Archaeopteryx) origin of birds will be the greatest embarrassment of paleontology in the 20th century.”

Feduccia proclaimed: “Paleontologists have tried to turn Archaeopteryx into an earth-bound, feathered dinosaur. But it’s not. It is a bird, a perching bird. And no amount of ‘paleobabble’ is going to change that”

University of Kansas paleontologist Larry Martin speaking about two fossils found in china, which were being claimed to be featured theropods, stated: “You have to put this in perspective. To the people who wrote the paper, the chicken would be a featured dinosaur.”

“As further proof that Archaeopteryx is not a transition species, fossils of two modern birds have recently been found in rock strata, dated by evolutionists, as being much older than Archaeopteryx.” (Fossil Bird Shakes Evolutionary Hypotheses, Nature, Vol. 322)

“In that great window to the past–the fossil record–we only find distinct plant and animal kinds, with no transitional forms. With the exception of creatures that have become extinct…. ALL life forms found in the fossils are just like those presently alive! To say it again: All non-extinct plant and animal fossils are the same as creatures now alive on the earth. There is NO evidence of evolution in the fossils.” (Evolution Encyclopedia Vol. 2, Part 1)

Sadly, given that Archaeopteryx is a mainstay in biology textbooks, students will continue to be mislead by this fallacious claim.

Taken from “Noah and The Great Flood: The Proof and Effects of It”

This will be the first in weekly posts exposing evolution. That is, if there is enough interest in the posts. I have an amazing amount of material from my book research that I would love to share.

2 thoughts on “The Dinosaur to Bird Fallacy”