Coelacanth – The fish that was supposed to have climbed out of the water millions of years ago is still alive and still a fish. 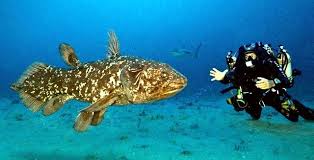 In the winter of 1938, a fishing boat off the coast of southern Africa, dragged from the Indian Ocean a fish that supposedly lived 350 million years ago and was thought to be extinct for 70 million years. The Coelacanth were considered to be ancestral to land vertebrates. It was considered an index fossil. Any rock which contained an Coelacanth fossil was believed to be 70,000,000 to 400,000,000 years old. Paleontologists had confidently pronounced the coelacanth was extinct before man had evolved. Yet, humans and coelacanths are living together in the present world. Another one was caught, thousands of miles away in Indonesia in 1998.  Several have been caught since.

The discovery of the Coelacanth was an embarrassment to the evolutionist, in that the Coelacanth was considered to be the chief candidate to represent a transition species from fish to amphibian. Supposedly one hundred million years ago, the Coelacanth walked out of the water on its fins, grew legs and became an amphibian. Millions of students had been taught that this fish was the ancestor of all land creatures, including man. However, they are still the same as they were supposedly a hundred million years ago. The evolutionist believed the Coelacanth lived in shallow water, ready to crawl out onto land, when in fact, it was a deep sea fish. Its discovery was a blow to the evolution theory as the following statements show.

“Throughout the hundreds of millions of years the coelacanths have kept the same form and structure. Here is one of the great mysteries of evolution.” (Jacques Millot, The Coelacanth, Scientific American)

“The brain of a 90-pound coelacanth weighs less than 50 grams [0.11 ounces] —that is, no more than one 15,000th of the body weight. No present-day vertebrate that we know of has so small a brain in relation to its size.” (Jacques Millot, The Coelacanth, Scientific American)

“…..We never saw any of them walk, and it appears the fish is unable to do so.” (Coelacanths: The Fish That Time Forgot, National Geographic)

The coelacanth, the fish that the evolutionists claimed walked out of the water and became one of the first amphibian, is alive and well today. But it is still a fish, just as God made it.

Taken from: “Noah and the Great Flood, The Proof and Effects of It.”