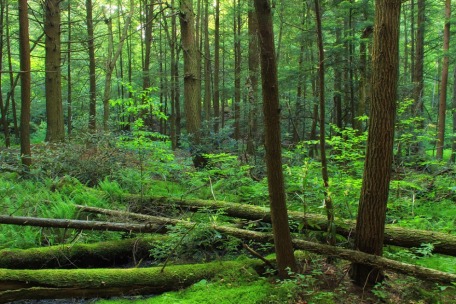 My hunting buddies Huck and Les were heading to the Upper Peninsula for the opening of the Michigan deer season. I couldn’t get away to go with them, but I would be able to join them in a couple days.

Upon arriving in the U. P., they found a camping spot and immediately began setting up camp. We would be hunting in the big cedar swamps along the north shore of Lake Michigan. As soon as camp was set up, Huck and Les headed for the swamp to scout hunting spots for when the season opened at daylight the next morning.

The morning hunt was unsuccessful, but they were excited about all the deer sign. Early afternoon found them back in the swamp. They would hunt until dark. When it became too dark to see to shoot, they called it a night and headed for camp.

On the way to the camper, Huck realized that he no longer knew which direction to go. He was lost. He had no idea where the camper was. Rather that go wandering around in the dark and maybe go the wrong direction. Huck decided to spend the night where he was and find the camper when it was daylight.

The three of us had an understanding. If one of us didn’t return at night, nobody was to get excited. We were probably just turned around and we would spend the night in the woods, then return in the morning. If we didn’t show up by noon, then someone should come looking for them. With that in mind, Huck decided to stay put.

Looking around, Huck picked out a large stump that he could lean back against to sleep. He broke off evergreen boughs to make a seat to keep him out of the snow. He thought he had a pretty good setup and would be comfortable enough.

Meanwhile, Les had returned to the camper. Instead of going into the camper, he decided to set on the steps, smoke a cigarette, and wait for Huck. He finished his cigarette and Huck still hadn’t appeared. Les continued to set there waiting for Huck. He was anxious to hear if Huck had seen any deer. Les finally gave it up and went in the camper. He turned on a light to begin preparing supper.

Back at the stump, Huck was all settled down for the night. He was all snuggled down in his hunting coat, hat and hood, prepared for a long cold night.

When suddenly, a light came on only a couple hundred feet away. If it had been daylight, he could have seen the camper from where he was sitting. It is surprising that they didn’t hear each other. Apparently, their heavy hunting hats over their ears, plus the evergreens and snow muffled the sound.

Huck gladly left his stump and went on to the camper with a story to tell. 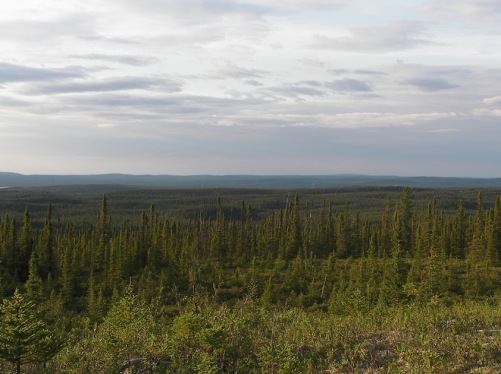 On another trip north deer hunting, I was with my dad and my brother Mark. This was the first time either of them had been to the Upper Peninsula. We would be hunting the big cedar swamps south of Gould City. This was all new country to them, therefore they would be doing a little exploring as they hunted.

We spent the mornings and evenings standing and watching for bucks. During the day we would sometimes still hunt. Still-hunting is moving silently and very slowly with a minimum of movement. Ever watchful, hoping to spot a buck before he spots you. Usually, they are bedded down during the day.

One day Mark decided that he would hunt straight away from the camper. He would continue hunting until late afternoon. If he hadn’t got a buck by then, he would reverse directions and hike back to the camper. It had gotten late in the afternoon and Mark began thinking about returning. He estimated that he had traveled a mile or two at least. It would take a while to get back. He didn’t want to give up hunting, but then he definitely wanted to get back before dark. The thought of spending the night in the woods didn’t scare him. But, I think the thought of going without eating was simply terrifying to him.

Mark decided to go just a little farther before returning. About the time he decided to head back, he noticed something white ahead of him. Walking ahead to see what it was, he walked out into the small clearing where our camper and truck was parked. Mark had walked in a big circle without knowing it. How easy it would have been for him to walk past the camper or miss it entirely. Or had he turned around sooner and started back to the camper. He would have walked away from it instead of towards it.

Mark later said that he was lost without even knowing it. Trust God to watch out for us, even when we don’t know we are in need.

These stories reflect two different situations. Huck thought he was lost but wasn’t and Mark was lost but didn’t know it.

As we travel through life. Satan will tell us that we are lost. He will try to convince us that there is no hope for us. Scriptures tell us though that we are never so lost that Jesus can’t find us and save us. All we have to do is ask. Jesus is our compass in life.

“Ask and it will be given to you; seek and you will find; knock and the door will be opened to you.” (Matthew 7:7)

Some of us have lost our direction as we are traveling through life. We are going in circles, but are unaware of it. We ignore God. We may even deny His existence. We are only concerned with our own pleasures. We are off course and we will miss Heaven unless we change the direction our life is going. We are on the verge of being lost for all eternity. However, it is not too late. We can turn around. Jesus can still save us. But, unless we realize we are lost, why would we ask?  Pray that we all may realize we need saving. We all are lost without Jesus.

“For all have sinned and fall short of the glory of God” (Romans 3:23)

“But God demonstrates his own love for us in this: While we were still sinners, Christ died for us.” (Romans 5:8)