For many years I set up deer camp on the edge of a large cedar swamp. It was at the end of an old logging road, nearly three miles from the nearest gravel road. Deer camp is a tradition in the Upper Peninsula of Michigan, as it is in many parts of the country. Over the years there have been many different people in the camp. This year it would just be my brother Mark, his wife Deb and myself. My brother and his wife had driven to the U.P. from Arkansas. For several years they made the trip. While they enjoyed deer hunting, Mark said the best part was the deer camp, campfires, and visiting. However, he always seemed to shoot his buck every time. The following is his story of one of those hunts.

“I was in my treestand early. The day was just breaking. The forest was coming alive. And, to top it off it was snowing.

Huge snowflakes were steadily falling. It gave a surreal feel to the woods. It was almost too perfect. It was going to be a great morning.”

“I sat there alert, just waiting for that big buck. Then I heard something behind me. It was coming nearer. Slowly, I twisted around, to see what it was. It was my wife, Deb, walking straight toward me. I’m thinking; what is she doing? Don’t she know, she is ruining my hunting.”

“As it turned out, she had already shot a nice buck. She wanted me to help her find it when I was finished hunting for the morning.  Well, the big snowflakes were coming down hard and fast. I decided that if I didn’t go right then, there wouldn’t be any tracks to follow.

“When I got to where she had shot the buck, I knew it was a solid hit from the amount of blood in the snow. I thought to myself that this would be quick and easy. I would still be able to go back hunting.”

“Well, we tracked that deer through a pine woods, a hardwood forest, up and down hills, across a stream and the buck’s track continued. All the time this deer is leaving a blood trail. I thinking, it can’t continue much farther. Normally, when you shoot a deer, you let it go off and lay down and die. However, with it snowing so hard, that was not an option.”

“Deb’s feet were beginning to hurt from all the walking. She had put on heavy insulated boots that morning. She never suspected that she would be hiking through snow for what seemed like miles. I suggested she go back. That got a laugh from her. She had no idea where she was. And I wasn’t too sure myself.”

“Still the tracks and blood trail continued. I had no idea how the buck kept going. In all my hunting, I had never experienced anything like that. The tracks eventually lead us down a steep ridge between two lakes which I recognized. The tracks and blood trail went down one side of the hill towards Ironjaw lake. It was thick with tag alders, so I had Deb remain on top of the ridge while I followed the tracks. I was sure I would find the buck dead before he got to the lake.”

“Amazingly the buck had circled in the tag alders and lain down. As I was making my way through the thick cover. He jumped up and went up the ridge in a different spot. Neither one of us were able to get a shot at the buck. Again, we started following the tracks, and again they went down the ridge toward the lake. We followed them right to the water’s edge. It had turned cold during the night, and there was a thin layer of ice on the lake. To our utter amazement, the deer had plunged right in and swum across the lake. We could see broken ice all the way to the other shore. Fortunately, the lake wasn’t very wide at that point.”

“Deb’s feet were hurting, but she was still game. So we took off around the lake. We found the buck a short distance from the water. A nice eight-pointer.” 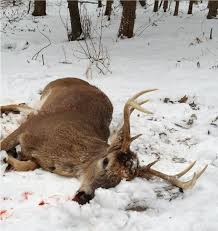 “I left her sitting there by her buck. She wasn’t leaving it. She was making sure it wasn’t going anywhere, and nobody was taking it.”

“By driving several miles around. I was able to drive to the Lake on a forest service trail. Which put me within a couple of hundred yards of Deb and her buck.”

“The buck was tough and lead us on an exhausting chase. But, by staying on the trail, we stayed ahead of the snow and was able to follow the blood trail and tracks to the buck.”

“Nobody likes to talk or think about blood. But, it was the blood of Jesus Christ, that He willing shed on the cross, that made it possible for the forgiveness of our sins. Because of His blood, we can spend eternity with Him in Heaven. We don’t have to understand it. We just have to believe.”

Romans 5:8-9  “But God demonstrated His own love for us in this: While we were still sinners, Christ died for us. Since we have now been justified by his blood.”