I have priced the books as low as the publishers will allow. Read free on Amazon prime. 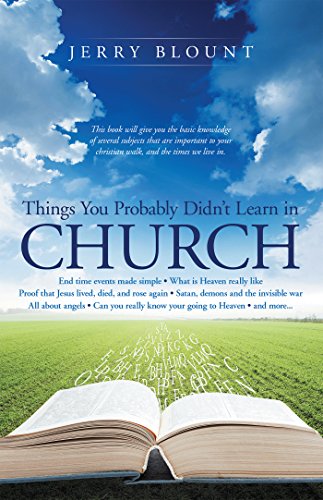 This book is based on Bible studies that I have conducted over the years. It covers several subjects that often are not taught in Church, simply because of the time needed to adequately cover them. Subjects such as:

This book is available at Amazon, Barnes and Noble, WestBow Press, Goodreads, Google Play, and other bookstores.

“Very well written and easy to understand. It brings the truth of the scripture to light in a way that is precise, well thought out, and written in a way that we have given the book to others as a witnessing tool. Truth and accuracy about things happening in the world today, and what is expected to happen in the last days is well described in this book.” Becky Hoath

“Jerry Blount’s book Things You Probably Didn’t Learn In Church explains things very clearly and backed up by a lot of scripture. It’s a very encouraging book. One thing I liked about it was that, when it was talking about what will happen when the world ends, the book didn’t try to stir up fear, but instead, shared practical, helpful things we can do about how to deal with what’s going on then. Like “here’s what we know, and here’s what to do about it.” The book also addressed a lot of common questions and misconceptions.

I think the part I liked best was the section about angels, where it explains different kinds of angels, what they do, and what that means for us. I took this book with me on a 3-day backpacking trip in the Smoky Mountains (because it weighed slightly less than another book I was reading). That’s where I was when I read the section on how angels protect us, and that’s what I was thinking about a little while later when I walked within a few feet of a black bear on the trail. What I had just read helped me to trust God’s ability to keep me alive.” John Lindley

Noah and the Great Flood: Proof and Effects

The apostle Peter warned us that in the last days there would be a new philosophy that would deny a worldwide flood, creation and the coming judgment by fire. Today we see this taking place exactly as Peter had predicted.

This book provides proof of a Biblical worldwide flood and backs it up with geological data. The information in this book offers evidence of creation by an omnipotent God and a global flood as God’s judgment of a sinful world. It provides evidence as to what the earth was like before the flood. It was a world, that after creation God had declared very good. Even after the fall of man, it was still paradise compared with the world we know today. The effects of catastrophic worldwide flood changed this planet drastically.

This book also offers extensive proof that disproves the theory of evolution. New scientific discoveries are showing that evolution is impossible. Also contained in this book is considerable scientific evidence, showing that the earth is only a few thousand years old. This book may go against much of the popular scientific views of today, but it does so with the evidence to back it.

The Bible gave us the history as well as the future of this world. The scientific and geological data that is available today fits well within that Biblical framework. In fact, it fits within the Biblical framework much better than any theories the evolutionary community has come up with, as this book will show.

Following Jesus and Fishing Along the Way

‘Following Jesus and Fishing Along the Way’ is a collection of 40+ stories and lessons learned from a lifetime spent exploring and enjoying the great outdoors.

As a long time outdoorsman I developed a love for the outdoors at a very early age. My adventures began in the hills of southern Indiana in the 1950s. It was a time when hunting and fishing were just a part of life, and life itself was simple. From the hills of southern Indiana, I migrated north eventually ending up in the vast forests of Michigan’s Upper Peninsula. For nearly forty years my wife Linda and I have resided on a small spring-fed lake right in the middle of the Hiawatha National Forest – twenty miles from the closest small town. This is where we raised our children and reveled in some of God’s finest handi-work in His creation of the forests, swamps, lakes, streams, waterfalls, and rock formations of the U.P.

Not only do we enjoy fishing, but also snowmobiling, skiing, snowshoeing, hiking, horseback riding, canoeing, kayaking, camping, boating on the great lakes, sightseeing, and just exploring God’s magnificent creation. When you spend as much time as I have in God’s great outdoors, you will naturally have many adventures. Some are humorous, some may be dangerous, but all of them leave their own story and lesson in life.

A sample of the stories included are:
Terror in the Night – Never Pick a Skunk Up by the Tail – Treed by a Bear – Suicide Cave – The Shrinking Catfish – One Mad Water Moccasin – Bear Attack – and more!

The End Times: Signs and Prophecy

The return of the Jewish people to their homeland with the creation of the nation of Israel in 1948 began the fulfillment of prophecy that would usher in the end times. Since then the world has been on a steady march to fulfill this prophecy.

Nations that were never allies in all of history have formed alliances that are predicted in the Bible, setting the stage for the end to come. Political, social, and geological events have been happening at an alarming rate, events that are predicted will take place in the end.

The events taking place in the world today are the same things Jesus told us to watch for, and when we see these things taking place, we will know we are standing on the doorstep to the end. Today the world is standing on the doorstep of the last seven years of Daniel’s prophecy, given to him by the angel Gabriel. This prophecy covered a total of four hundred and ninety years. The first four hundred and eighty-three years of this prophecy have taken place exactly as predicted, including the prediction of the exact day Jesus would enter Jerusalem and be crucified hundreds of years before the event happened.

Twenty-six hundred years ago Daniel predicted the alliance between Russia, Iran, and the other Islamic nations during the end. If Daniel’s prophecy has been perfect for the first four hundred and eighty-three years, then we must believe what he said will happen in the last seven years will likewise come true.
Follow along with Jerry as he ties in the events that have already taken place and those happening in the world today with the predictions of Daniel, Revelation, Isaiah, Ezekiel, and the rest of the Bible. We are near the end, as Jesus said, we are standing on the doorstep.

Jesus said that no one would know the hour of His return. However, He also said that we can know when the time is near and that we should be watching for His return. This book will take you through the last century of world events and how they tie in with Bible prophecy to bring us to the point where we are today, standing on the brink of the end times. The rapture is the next event on the prophetic calendar. Are you prepared?

Basic Christianity is a book of several subjects that are beneficial to living a Godly life to the fullest, as well as equipping the Christian with the knowledge and answers to bring others into the family of God.

Including subjects such as:
*Proof that the Bible is true and God-ordained.
*Proof that Jesus lived, died and rose again.
*You can know for certain that you are going to Heaven.
*Learn all about angels.
*Satan, demons, and the spiritual war
*Living a joy-filled life.
* Understanding grace is essential to living the Christian life.
*What is the significance of the blood?
*Love is the greatest attribute of a Christian.
*Understanding the Trinity – The Father, Son, and Holy Spirit are all fully God.
*What will heaven really be like?
*Daniel’s amazing prophecy.
*What is the great commission? What does God expect of us?
*Prayer is our lifeline to God. Is our prayer life what it should be?