The Bible says that man and all the creatures lived at the same time. Evolutionists claim that dinosaurs were extinct 60 million years before man walked the earth. Any proof that man lived along with dinosaurs, simply destroys the theory of evolution. This is something that evolutionist simply will not accept. Any evidence proving that man and dinosaurs lived concurrently is met with resistance and is quickly explained away, sometimes with rather bizarre explanations. However, the proof still exists that dinosaurs were here for some time after the flood. 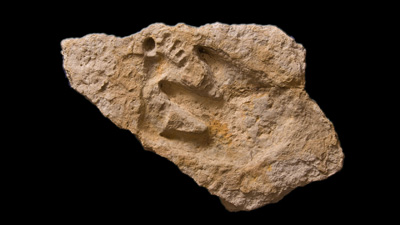 The Creation Evidence Museum of Texas has a set of Cretaceous footprints discovered by archaeologist Alvis Delk. This fossil of Glen Rose limestone consists of a dinosaur footprint (Acrocanthosaurus) on top of an eleven-inch human footprint. The human footprint matches several other fossil footprints in the area. Extensive laboratory testing verified the authenticity of both tracks.  END_OF_DOCUMENT_TOKEN_TO_BE_REPLACED